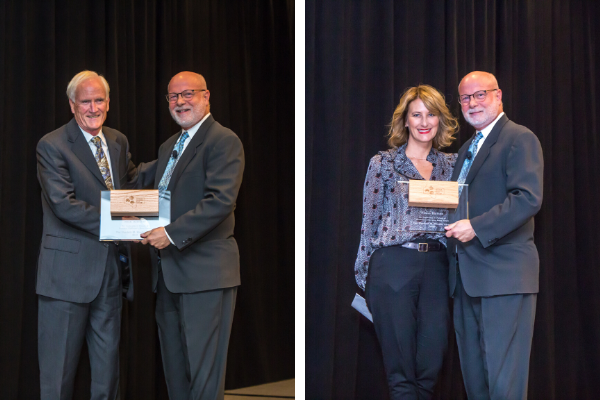 In a historic first, the Southern California Water Coalition will present its Hon. Harriett Wieder Leadership Award to two individuals, Richard Atwater and Fiona Hutton, at its Annual Dinner event on October 24, 2019.

“The Harriett M. Wieder Award goes to two people — Richard Atwater and Fiona Hutton — who have shaped the success and achievements of the Southern California Water Coalition for more than a decade,” said SCWC Executive Director Charles Wilson. “Their dedication, insights and innovation have led the way toward future water reliability for this region and for the state.”

The award, a block of wood, symbolizes the words of former Orange County Supervisor Wieder, a founder of SCWC, who used to say that sometimes you have to hit someone with a 2×4 to get people’s attention and drive change.

Richard Atwater
Atwater, the former executive director of the Southern California Water Committee from 2011 to 2016 and its current senior advisor, has dedicated more than 35 years of his life toward water resource management and development in the western U.S. and is a true pioneer in the field. As executive director, Atwater played a pivotal role in a number of Southern California water policies including the Colorado River, statewide issues such as the Bay Delta Conservation Plan (BDCP), the Governor’s water action plan and policies regarding stormwater capture, water use, water recycling, groundwater storage, and desalination. He previously worked as the CEO/GM of Inland Empire Utilities Agency (1999-2010), President of Bookman Edmonston Engineering (1996-1999), and GM of both West Basin and Central Basin MWDs (1990-1996). Adding to his already impressive pedigree, Atwater was a member of the California Water Commission, the California 2001 Drought Task Force, 2003 Water Recycling Task Force and the 2006 Desalination Task Force. Additionally, he served on the Board of Directors for the Association of California Water Agencies and Urban Water Institute, as president of the WaterReuse Association and Southern California Alliance of Publicly Owned Treatment Works and with Western Urban Water.

“Everyone who has a stake in the future of California’s water supply owes Rich a debt of gratitude for his service. He’s helped drive consensus among our region’s diverse stakeholders and motivating all toward action aimed at ensuring that this and future generations have access to safe, affordable and reliable drinking water,” Wilson said.

Fiona Hutton
One of the state’s best-known public affairs professionals, Hutton has more than two decades of experience in California’s highly competitive and constantly evolving political and regulatory landscape. Since launching her firm, Fiona Hutton & Associates (FHA), in 2001, she has worked at the epicenter of the most high profile water and natural resource issues, including Delta Conveyance/WaterFix, regional infrastructure projects, water recycling, wastewater treatment, water quality, habitat restoration and conservation programs – representing statewide trade associations, joint powers authorities, non-profits and regional and local water agencies throughout the state.  In addition, Hutton played an instrumental role in every major water and natural resources bond passed in California, including Props 68, 84, 50, 40 and 12/13 – delivering much needed funding for water and environmental projects. Her firm is responsible for creating award-winning programs for SCWC including WaterNext and the much accoladed “Lawn Dude” conservation campaign.

In addition to her work with FHA, Hutton serves on the boards of directors of the Los Angeles Area Chamber of Commerce and Open California. For several years running, she has been recognized by Capitol Weekly as one of the 100 most influential players in California politics.

“Fiona’s extensive contributions to SCWC and to the state and regional dialogue about water underpin the success our organization has had. She has raised our region’s voice statewide with aplomb, advancing understanding and advocacy for California water,” Wilson said.

About the Award & Dinner
Each year, SCWC selects an individual or organization that has demonstrated an extraordinary commitment to advancing California’s water supply issues. Atwater and Hutton both join a renowned group of water leaders who have been honored with this award.

The SCWC Annual Dinner is the region’s premiere networking event for water, business, agriculture, local government, labor and environmental leaders. The event will be held today at the Long Beach Hilton, featuring keynote speaker Mary Creasman, CEO of the California League of Conservation Voters. In her keynote address, Creasman will speak about water resiliency and climate change, offering her perspective on grassroots organizing and visionary policy change.

View photos from the event on our Flickr page.