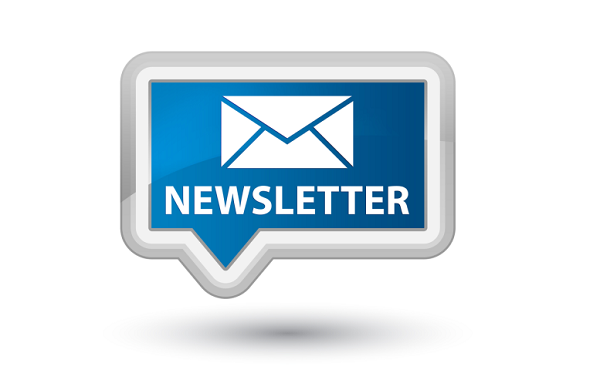 Wade Crowfoot, CEO of The Water Foundation and former advisor to Governor Jerry Brown, will be the keynote speaker. A big thanks to the Inland Empire Utilities Agency for sponsoring the luncheon, and we look forward to seeing you there! 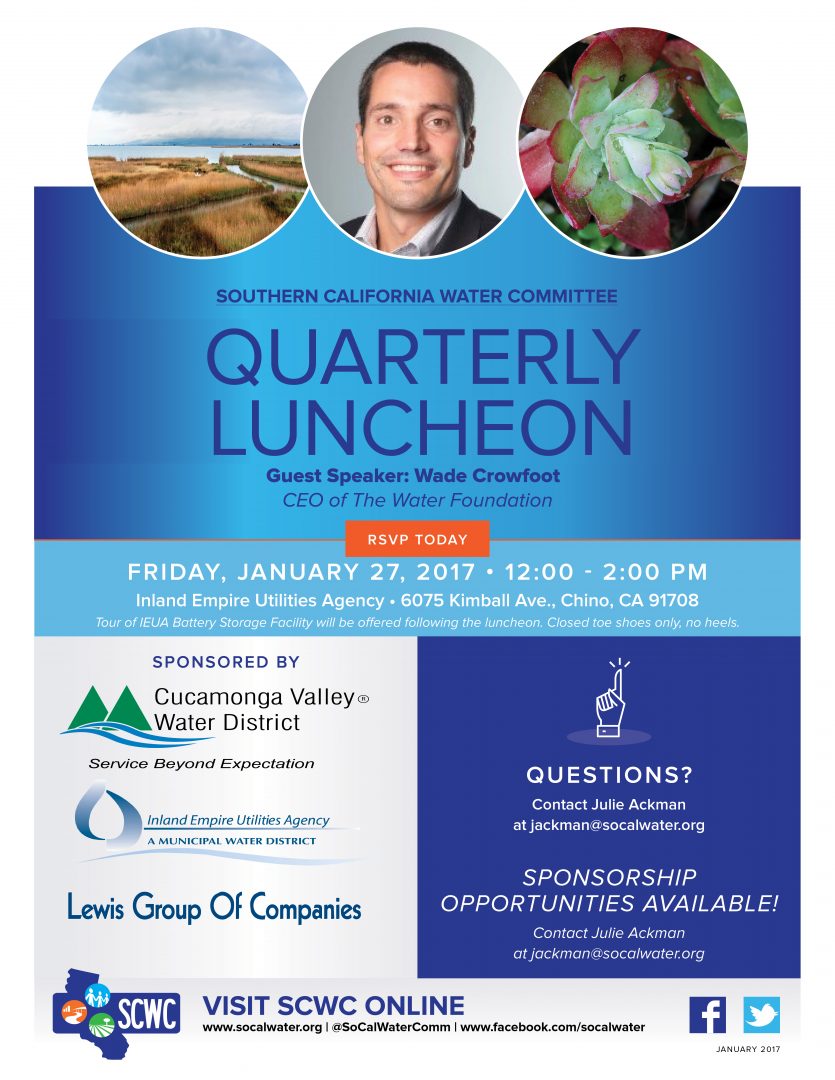 Recent Storms and Atmospheric Rivers
After the biggest storms in the state in nearly a decade, California’s water woes are improving. Some of the state’s heaviest rains over the past month have been caused by the meteorological phenomenon known as an atmospheric river – essentially a long, narrow corridor in the atmosphere that carries major amounts of water vapor to the rhythm of the weather pattern.

Experts estimate that the most powerful of these rivers can carry the equivalent of 15 times the average flow stemming from the Mississippi River’s mouth.

We welcome the rain and snow and support investment to capitalize on winter events. It’s critical that California improve its ability to capture water and install a modern, flexible system that allows us to move and store water when it’s available. Locally, improved stormwater capture could increase both supplies and protect our environment in the coming years.

SCWC Response to “Conservation as a California Way of Life”
In late November, the State Water Resources Control Board, in conjunction with other agencies, released a public review draft of their plans to implement a long-term water conservation framework for California.

SCWC is largely supportive of the initial recommendations in the Draft Report, and appreciates the Board’s inclusion of input throughout development. However, statewide command and control has not shown to be effective, and it is imperative that we allow water agencies to meet objectives via individual plans, not by a standardized prescription.

The Southern California region is taking innovative action to help drought-proof the region, and we’ve embraced an all-hands on deck, no idea too big or too small approach. We need to invest in our statewide water infrastructure, secure supplies from the State Water Project, continue building up local water supply resources and make water conservation a high-priority for every Californian.

Precipitation Brings SWP Allocation Increase
As storms struck throughout the state during the beginning of the month, the California Department of Water Resources (DWR) has increased its estimate of annual State Water Project supply deliveries twice since the initial announcement, most recently to 60 percent from 45 percent.

“Today’s State Water Project allocation increase is a positive sign for Californians,” said Terry Erlewine, General Manager of the State Water Contractors. “While we’re excited about the strong start to the new year, recent storms also serve as a reminder we’re at their mercy. Only through investments in a modernized water delivery system, California WaterFix, can we bring a reliable, climate-resilient water supply to the people, cities and farms of California during wet years as well as dry ones.”

Thanks to the recent storms, reservoirs are approaching their respective capacities and snowpack in the Sierra Nevada has been significantly bolstered. With forecasts of more precipitation in the near future, DWR is optimistic that it will be able to increase allocations even further in the coming months.

New Biotechnology Provides Innovative Solution for Groundwater Treatment
On January 25, green-tech company Microvi launched its innovative nitrate-removal technology, Denitrovi™, at Sunny Slope Water Company in Pasadena, which sources 100 percent of its supplies from groundwater. Several leaders of SCWC member agencies were in attendance, and praised the technology for its potential to significantly innovate the process for groundwater treatment.

“It’s amazing to see a biological treatment system that doesn’t produce secondary waste,” said Shane Chapman, an SCWC Board of Trustee member and General Manager of the Upper San Gabriel Valley Municipal Water District. “Waste streams have always been a huge environmental and cost issue in water treatment—this is a long-overdue course correction for the industry.”

With the drought still upon us, groundwater is an ever-important water source, and California’s standards for groundwater quality are some of the strictest in the country. 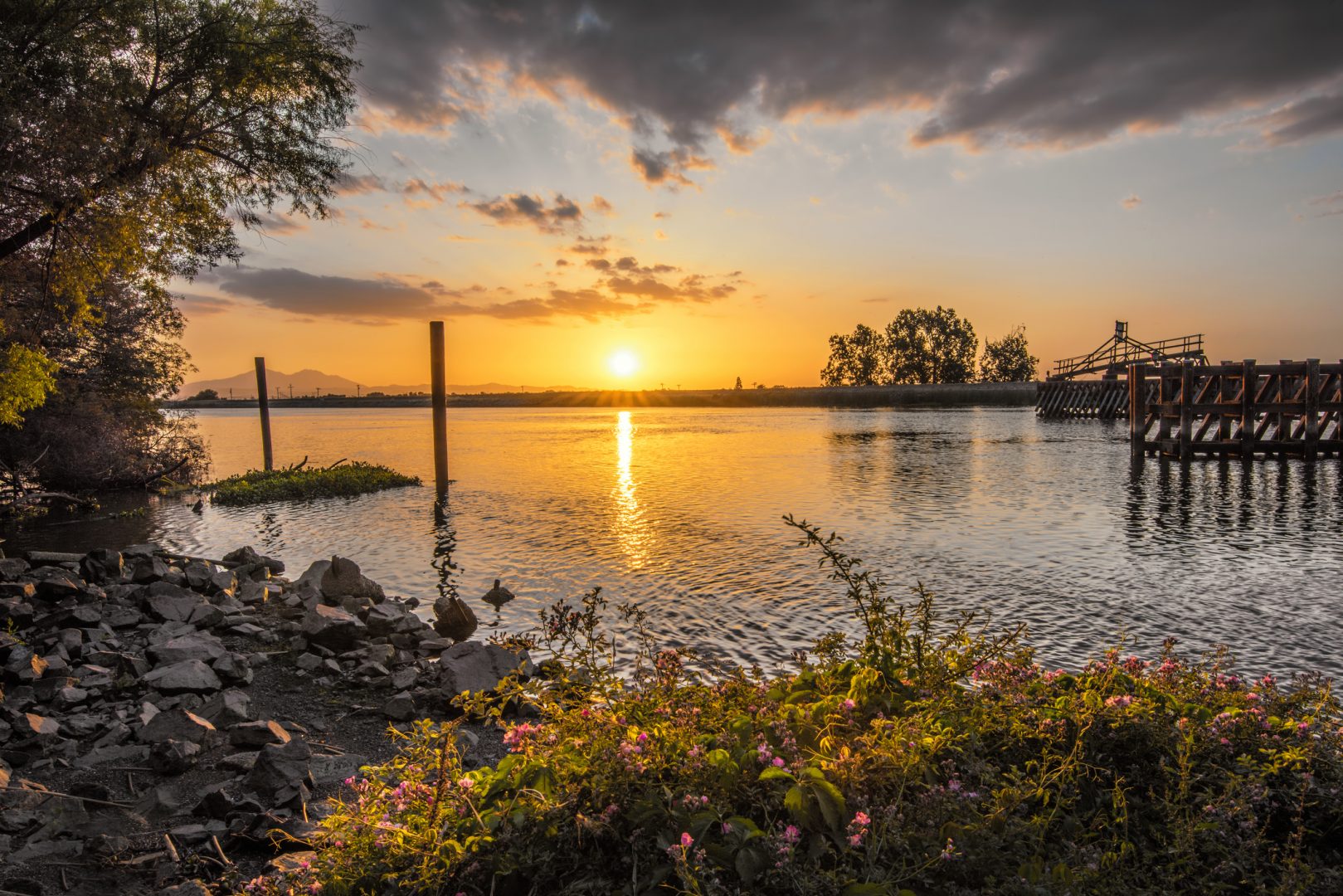 “Today marks a significant step toward protecting our state’s water supply,” said Charles Wilson, Executive Director of Southern California Water Committee. “Southern California Water Committee joins organizations throughout the region and state, including business, local government, agriculture and water, in support of advancing this plan as a long-term solution to ensuring millions of people have reliable access to fresh water. With the ever-present threat of seismic disaster on our horizon, the need for decisive action is greater than ever, and California WaterFix proposes a modern, new system capable of protecting one of our most important water resources.”

The release and findings of the Final EIR/EIS are a promising sign for the project and California’s water future. After years of compromise, California may well be on the verge of a comprehensive solution to protect the state’s water system from major earthquakes, drought and climate change, and secure our water supply for years to come.

“This is an historic night for Santa Clarita Valley and our region’s water reliability,” said Maria Gutzeit, President of Newhall County Water District. “The new district is now poised to take on our serious water issues head-on and collaboratively.”

According to a joint press release from the two water providers, the new water district will reduce costs, enhance regional water management and strengthen the Valley’s water governance.

“The new water district is built for financial strength, ratepayer advocacy and long-term sustainability,” said Dan Mortensen, Director for Newhall County Water District. “We’ve developed ideas and innovations that will modernize our water management in the Santa Clarita Valley and serve as a model of fiscal responsibility statewide.”

See the full press release here, or learn more about the new water district at yourscvwater.com.

Recognizing its potential for securing California’s water future, the directors of the Metropolitan Water District of Orange County (MWDOC) unanimously passed a resolution on December 5 expressing their support for the proposed California WaterFix project. The decision comes following MWDOC’s Water Reliability Study that found California WaterFix would be the single most-cost effective solution to ensure long-term water reliability. The directors approved the resolution 7-0, and will now focus on launching a campaign to build support for decisive action among Orange County leaders and residents.

“The California WaterFix is critical to ensuring we can continue to reliably serve our customers with water from north of the Delta,” said Metropolitan Water District of Orange County President Wayne Osborne. “It’s not about getting more water, it’s about reliability and protecting our investments. It is not a question of “if;” without decisive action, the Delta will fail.”

MWDOC is a wholesale water supplier that serves 2.2 million people in Orange County. According to the water district, without the project, Orange County residents would face frequent shortages, requiring residents to significantly cut back water use.

Lawn Dude’s Conservation Corner
All this rain has me tempted to drink that extra glass of water at the end of the day… but I’m staying strong! Despite the recent showers, we as Californians must remember we are still in the middle of a severe drought and that conservation is still the key for securing our water future.

The month of January is always a great time to reflect on the past 12 months and set goals for the year ahead. I’m taking this opportunity to double down on my mantra, “Conserve, Conserve, Conserve!” and lower my water intake even more significantly. Double check your local water agency’s conservation targets, and turn off your sprinklers during rainy weeks! Pull your head out of your grass and let’s beat this drought!

Join SCWC Today!
SCWC is growing every week with new members, from engineering firms to cities and counties. SCWC is the only organization that represents such a broad spectrum of Southern California interests on water issues. If you aren’t already a member, be sure to check out our various membership levels and pick the one that’s right for you. If you’re already a member, be sure to tell others about SCWC and how it has benefited you and your organization.