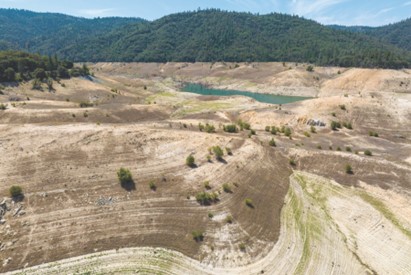 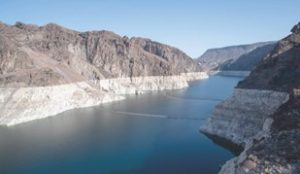 The light-colored ring around Lake Mead shows the decreased water level from years of drought conditions on the Colorado River. The photo was taken on Feb. 16. The reservoir was formed by Hoover Dam and is considered one of the largest artificial lakes in the world with 750 miles of shoreline. The lake helps provide water for 25 million people in Nevada, Arizona, and California. The historic water shortage on the Colorado River will likely lead to mandatory water cutbacks. Photo Courtesy of the United States Bureau of Reclamation

You don’t need to be a fortune teller to predict what the future may hold for water availability in Southern California next year. The region’s limited imported supplies will prompt water officials to consider region-wide mandatory conservation measures should the ongoing drought continue.

The Metropolitan Water District of Southern California’s six-county service area normally relies on supplies from Northern California and the Colorado River to cover more than half of the region’s water demands. The ongoing drought has reduced supplies from Northern California over the last three years to historic low levels. And the Colorado River is facing its first-ever shortage condition, with a call by federal officials for river users to prepare for deeper cuts next year.

In response, Metropolitan staff has informed its Board of Directors that it is preparing ways to implement mandatory conservation across Southern California, if necessary. The board could consider actions as early as January.

“We need to prepare for this drought to continue,” said Metropolitan General Manager Adel Hagekhalil. “Even if the rains return, it will take a lot for the State Water Project system to recover, and the Colorado River will remain in a historic shortage condition. A region-wide response may prove necessary.”

“We are working closely with these local agencies to manage through this challenge and develop plans to fast-track lasting solutions,” Hagekhalil said. “Even with these efforts, supplies will be limited until the State Water Project can deliver more water.”

While Southern California’s water challenges during this drought have most affected these areas, the worsening shortage on the Colorado River from a decades-long drought could prompt region-wide mandatory conservation as early as next year.

The federal Bureau of Reclamation declared the first-ever shortage condition for the river in August 2021. With storage levels continuing to decrease, Reclamation recently announced that additional cuts would be necessary in 2023. Those cuts have yet to be identified while Metropolitan continues to work with other water users in California, Arizona, and Nevada to negotiate a collaborative response.

In addition to pulling from its local reservoirs, Metropolitan has operated its Colorado River Aqueduct at nearly its full capacity to meet the region’s demands this year. In future years, that might not be possible.

Metropolitan staff informed the board earlier this summer that it would develop a plan to enforce mandatory conservation on its 26 member agencies next year, taking into account unique local circumstances. “We are planning for the worst and hoping for the best,” Hagekhalil said. “In the meantime, everyone can do their part by never wasting a drop of water.”

Although all eyes are on water availability in 2023, Hagekhalil added that the region also must plan for the future and address climate change by increasing supply resiliency through infrastructure investments. “All options must be in our resource mix, from imported supplies, conservation, and recycling to local stormwater capture, recharging and remediating ground water basins and building storage. We also must improve our regional water system to move water across our service area to equitably meet future demands,” he said.

Check out related What Matters Water TV and Podcast episodes to learn more:

At left, an aerial view of the South Fork of Lake Oroville in Butte County on Aug. 2. On this date, the storage was 1,440,432 reservoir acre-feet (AF), which is 41 percent of the total capacity. Lake Oroville is the largest reservoir in the State Water Project and it peaked this year at just over half its capacity. Above,