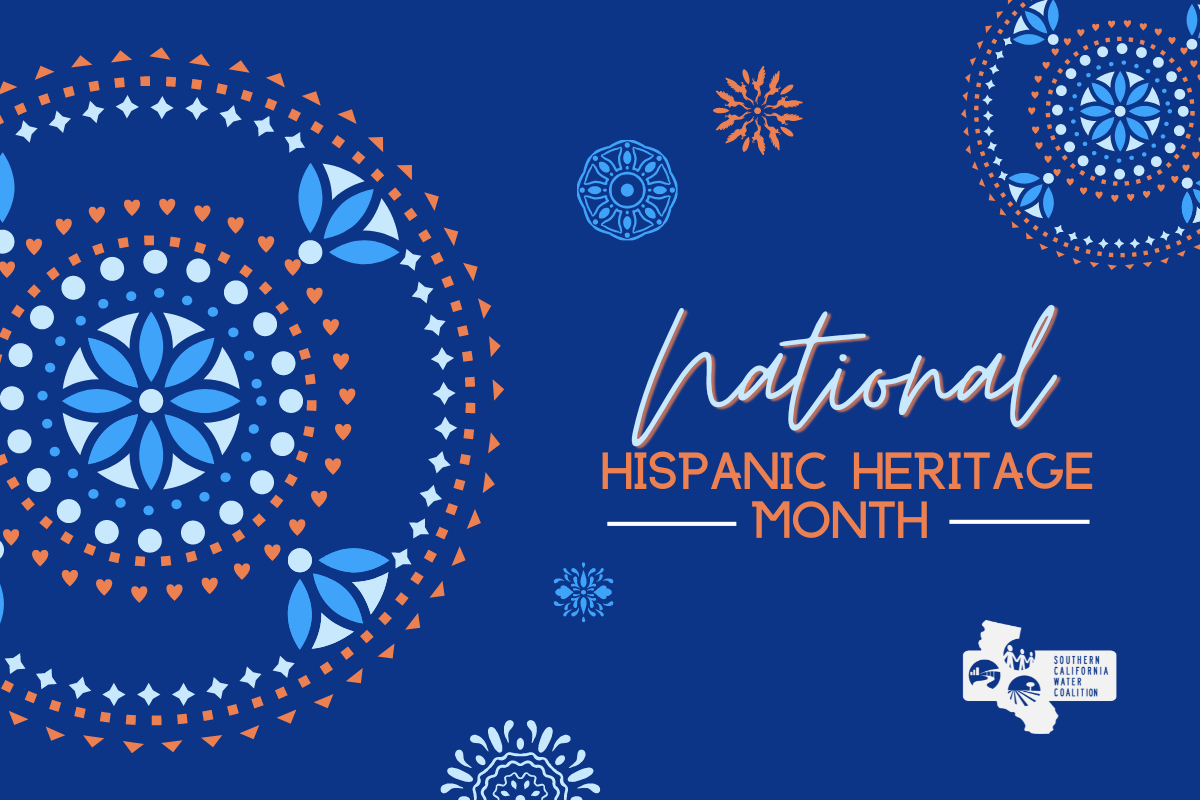 During this time of honoring a heritage that is so impactful to the culture and action of Southern California, we’ve been inspired to magnify the voices of our very own Hispanic and Latinx leaders. Their experiences in utility and resource management, passion, and advice to others pursuing the field provide an inspirational outlook for Hispanic Heritage Month. 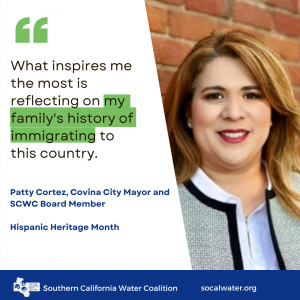 Covina City Mayor, SCWC board member, and vice chair of the SCWC Legislative Task Force Patty Cortez draws inspiration from her ancestry and is taking this month, in particular, to reflect on her roots.

“What inspires me most is reflecting on my family’s history of immigrating to this country. I reflect on the hard work and courage that my maternal grandfather and Dad had as immigrants—the desire to create a new life for themselves and family is a level of courage that I can only hope to honor,” says Cortez. “The sacrifices they made as individuals to provide us with a good education and a strong work ethic are never lost and always appreciated.”

Cortez owes her success to her family’s encouraging words to overcome obstacles and closed doors. “My parents took pride in our Latino heritage and taught us to embrace our culture and respect cultural differences beyond our own,” says Cortez. “While they may say the success of [their] children and grandchildren is their greatest sense of accomplishment, they both are my greatest heroes and inspiration.” 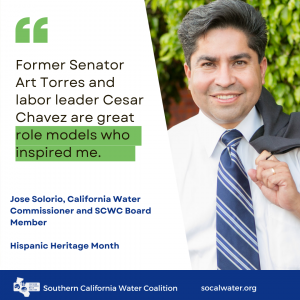 His father, Jose Federico Solorio, a farmworker foreman, would wake up at odd hours and take Solorio along to turn water valves on and off, part of irrigation practices in the Central Valley back then. He has compelling words for those celebrating Hispanic Heritage Month who are interested in joining the water community. “Water plays a huge role in California’s economy and way of life. I’d encourage people of all walks of life, especially those of Hispanic heritage, to get involved with water,” says Solorio. “It is an essential area of our workforce with many challenges, and it’s imperative that we have our best and brightest go into this area of study and industry.”

In addition to his family, Solorio admires Hispanic Americans who advocated and created new paths for future generations. “Former Senator Art Torres and labor leader Cesar Chavez are great role models who inspired me,” says Solorio. He summarizes his words for current and future water professionals quite neatly: “Sí se puede—yes, we can.” 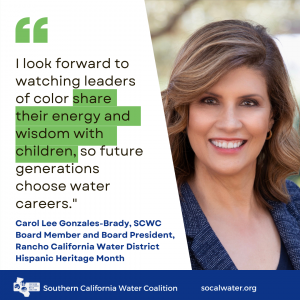 Board President of the Rancho California Water District Carol Lee Gonzales-Brady was taught early on the value of a strong work ethic.

“The eldest of ten children, my father left school at a young age to support his family as a clerk in the post office,” says Gonzales-Brady. “He worked long and intense hours at his job, overcoming the bigotry and obstacles that were rampant in that era.”

Upon her father’s retirement, he had worked his way up to U.S. Customs Supervisor, Port of Los Angeles. In addition to the great effort he put into his career, he always made sure to put his family first. “I’m incredibly grateful to have had him as a role model,” says Gonzales-Brady.

As she was influenced by the value of hard work and dedication, she hopes to see talented new professionals of all backgrounds grow and join the water field. “I look forward to watching the leaders of color emerging in the industry share their energy and wisdom with children, so future generations choose careers in water.”

Advice for Those Starting Out 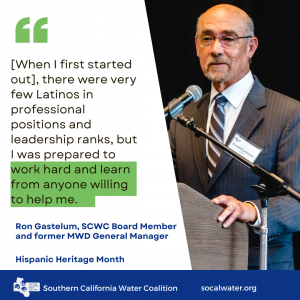 Longtime SCWC member and former Metropolitan Water District General Manager Ron Gastelum has had a distinguished career. Reflecting on Hispanic Heritage Month, he is inspired by hardworking immigrants from Latin America who continue to make America a better place, including his parents and grandparents. He encourages more people of diverse backgrounds to bring their talents to the water industry as he did many years ago.

“At the time, there were very few Latinos in professional positions and leadership ranks, but I was prepared to work hard and to learn as much as I could from anyone willing to help me,” says Gastelum. “I joined various employee organizations and took advantage of every training opportunity. I had no expectations of advancement or even a desire to become a leader, but I was introduced to the great value of mentors.”

When Gastelum first joined the Metropolitan Water District, he didn’t seek mentors with any plan or intention. Instead, he quickly realized that leaders sought him out because they recognized his qualities and a work ethic that supported them in their work. “This industry is rapidly changing, with much turnover in the workforce. There are many opportunities,” says Gastelum, who encourages those just entering the water industry to apply themselves to achieve success. “Don’t take shortcuts or try to be ‘political’ in seeking opportunities. Just consciously try to add value in everything you do.”

Also, don’t be afraid to speak up. You may find more allies than you think. Gastelum recalls a meeting with people outside the organization where one participant started berating the ‘Mexicans.’ “Without asking the meeting chair for permission to talk, I cut the man off and told him his statements were unacceptable and racist. The meeting chair quickly changed the topic.” Gastelum remembers reporting the incident to his mentor, Bob Will, concerned that his mentor would feel his statements were more personal than the business of Metropolitan. But Will said he thought the comments were racist too. “I was really impressed with this response and I think it was the beginning of my lifelong loyalty to Metropolitan,” says Gastelum.

Paving the Way for Future Achievement 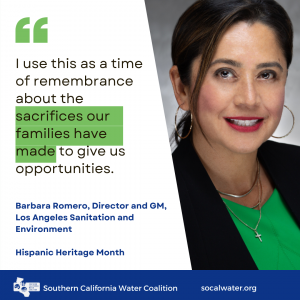 Director and General Manager of the Los Angeles Sanitation and Environment Barbara Romero celebrates accomplishments and reflects on lessons learned from her ancestors during Hispanic Heritage Month.

“This month is my mother’s birthday, and since she passed away, I have used this as a time of remembrance about the sacrifices our families have made to give us opportunities,” says Romero.

Looking to the future, she promotes more diversity in the water industry, particularly in leadership, where initiatives in water infrastructure can be designed and delivered to the next generation.

“Having more people at the table brings different perspectives and backgrounds,” says Romero. “This will directly impact policy initiatives that impact people’s lives, and these voices will be valuable contributions as new policies get implemented.”