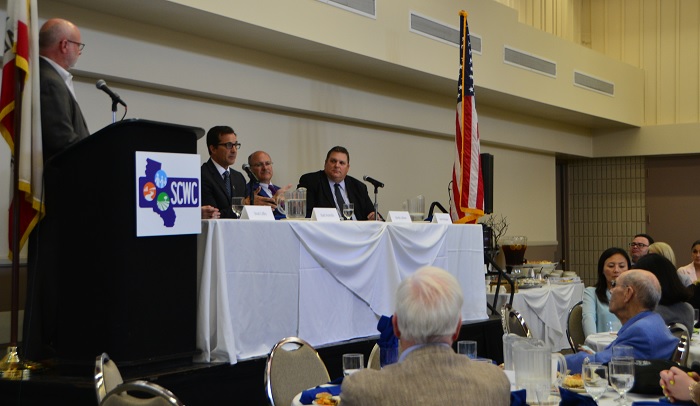 In Orange County where I live, water agencies have used purified wastewater to recharge a regional aquifer containing drinking supplies for a decade. Now it looks as though Los Angeles County is on track to massively expand its efforts to do so as well, and also to capture, treat and store more stormwater. It’s an idea that makes sense as we plan for a future of more severe droughts as well as more intensely wet winters.

If you were among the 120-plus people attending our most recently Quarterly Luncheon on April 26 at the Carson Event Center, you heard firsthand from the Southland water agencies that are making bold investments in local projects such as stormwater capture, water recycling and groundwater recharge.

From Los Angeles Mayor Eric Garcetti’s pledge to recycle all of the city’s wastewater by 2035 to the $300 million in funds made available each year for stormwater capture projects in L.A. County thanks to Measure W to plans for a large regional water recycling plant, the region is moving toward a more sustainable water system in which every drop of water is treated as too precious to use just once.

It’s all part of a larger regional solution that acknowledges there is no one answer to our water issues. Instead we must invest in many different types of projects to ensure future water supply resilience and reliability. It’s that all-of-the-above approach we are always talking about as key to the region’s water future.

Speakers from our luncheon sponsor West Basin Municipal Water District Director bookended the event. WBMWD Director Scott Houston providing a warm welcome to luncheon attendees. His fellow Director Gloria D. Gray (who is also chair of the Metropolitan Water District Board) provided closing remarks that reflected on the need for water leaders to be visionary and “look beyond what is possible now.”

Attitudes toward recycled water being reintroduced into drinking water supplies have evolved, said panelist Marty Adams, COO of Los Angeles Department of Water and Power, who talked about the city’s accelerated efforts to capture more stormwater and advance Mayor Garcetti’s goal of recycling all of the city’s wastewater by 2035. “People are more accepting than they were 20 years ago,” Adams said, attributing the shift in part to the groundbreaking work done by Orange County Water District and others.

Brad Coffey, water resources management group manager for Metropolitan Water District of Southern California, stressed the need for a regional vision rather than a hyper-local one. He quoted Metropolitan’s first Board Chair W.P. Whitsett exhorting the region to come together to build the Colorado River Aqueduct back in 1930: “Whatever is done should be done for the benefit of the whole…and shared by all the parts.” Coffey then spoke about Metropolitan’s Regional Recycled Water Program and demonstration facility, which aims to purify wastewater for reuse rather than pumping it into the ocean as waste.

Echoing the importance of coming together as a region to solve problems, Mark Pestrella, director of Los Angeles County Public Works, advised attendees to think beyond talking about individual agencies, service areas and boundaries. Instead, he said, we need to get used to talking about water in a holistic sense. He went on to provide an update on the county’s Safe Clean Water Program, which will use Measure W funds to modernize the county’s 100-year-old water system to better protect public health, our environment, and maximize a cleaner, locally controlled water supply.

All that captured stormwater and purified wastewater has to be stored somewhere, and the West and Central Groundwater Basins are the most likely place. Robb Whitaker, general manager of Water Replenishment District of Southern California, talked about how his agency is partnering to replenish groundwater and store for later use. Big projects like Metropolitan’s Diamond Valley Lake aren’t feasible to build in Los Angeles County, he said, but we can use the water storage under our feet.

It’s an exciting time of transformation in Los Angeles County and it was terrific to hear more about the progress being made. As our closing speaker Gloria Gray said, water leaders must be visionary because the decisions they make have ramifications for decades and decades into the future. It is only by looking beyond what is possible today to what may be tomorrow that we meet our responsibilities to the next generation.

We would love to include your voice in the conversation. How would you prepare Southern California with sustainable, reliable water for our future? Join us at SCWC and help be a part of the solution for our region’s future.