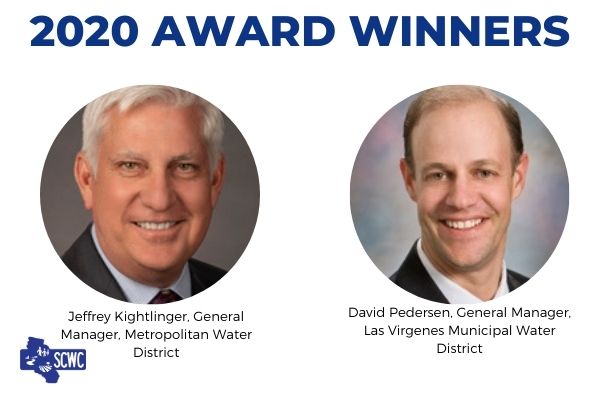 “This year is special because we are seeing the incredible adaptation abilities in our water leaders,” said SCWC Executive Director Charles Wilson. “In a year filled with change, it was the best time to introduce a new award. We are grateful to have found such deserving honorees.”

As in previous years, the Harriett M. Wieder Award is presented to a standout leader who has demonstrated an extraordinary commitment to advancing California’s water supply issues. This year, the award went to Jeffrey Kightlinger, the general manager and chief executive officer of the Metropolitan Water District of Southern California.

“Our region and the state of California owe a debt of gratitude to Jeff Kightlinger for his tireless work on modernizing the state’s water infrastructure through the Delta Conveyance project and more to assure a sustainable water future. From the Colorado River Quantification Settlement Agreement to its drought contingency plan to efforts to build Southern California’s largest water recycling facility, his legacy is assured,” Wilson said.

Known for his collaborative negotiating skills and deep knowledge of California water issues, Kightlinger has served as general manager of MWD since 2006. In that role, he  manages the nation’s largest wholesale water agency in its mission of ensuring safe and reliable delivery of high-quality water through its 26 member agencies to a region of more than 19 million people. In March, he announced he would retire from the position at the end of 2020.

In a video message, U.S. Senator Dianne Feinstein lauded Kightlinger for his steady and invaluable leadership in resolving extremely complex water and environmental issues. “Thanks to your efforts, California’s water future is really in a far better place today. It was just a few wise hands like Jeff who were able to accomplish the remarkable feat of bringing all seven Colorado River basin states together to develop the historic drought contingency plan for the river,” Senator Feinstein said.

Keeping the water flowing during his lengthy career at Metropolitan was no easy feat, as his term was punctuated by severe drought that included the driest year on record in Southern California. Under his leadership, the water district successfully faced water supply challenges on its two main sources of imported water: the Colorado River and the State Water Project. Through it all, he has been a strong proponent of cooperative, voluntary approaches to managing shared resources such as the State Water Project and the Colorado River, believing that agreements among those most affected are more effective than top-down solutions or federal or state mandates. Today, he leaves Metropolitan and Southern California well-positioned for the future through an approach to regional water management that incorporates wide-ranging solutions from stormwater capture to recycled water to groundwater recharge to improved state infrastructure.

Kightlinger holds an undergraduate degree from the University of California at Berkeley and a law degree from Santa Clara University. He serves on a number of boards including the Coro Foundation, the USC Price School of Public Policy, the UCLA Sustainability Advisory Board, the Climate Action Reserve, the California Foundation on the Environment and the Economy, the Los Angeles Economic Development Council, and the Los Angeles Area Chamber of Commerce.

This year, along with the Harriett M. Wieder Award, the SCWC has introduced the brand new Kathy Cole Award. Kathy Cole, former Metropolitan Water District executive legislative representative, is known for her exemplary career and commitment to education and advocacy in water policy. As part of her recognition by the SCWC in 2019, an award has been created in her honor to be presented to a deserving individual each year who exemplifies the perseverance and collaborative spirit that Cole is known for. This year, the SCWC has found that individual in David Pedersen.

Pedersen, the general manager of the Las Virgenes Municipal Water District and the administering agent for the Las Virgenes-Triunfo Joint Powers Authority, brings over 25 years of public service experience. By focusing on water management, flood control, and other public service infrastructure, he serves as the chief executive responsible for providing water and sanitation services to approximately 100,000 people.

“Dave Pedersen has literally blazed the trail for many water suppliers on several fronts,” Wilson said. “Whether it is his advocacy for water agencies struggling against air pollution controls to keep water flowing during wildfires or his generous sharing of knowledge and experience in the county’s effort to capture, treat and store stormwater, Pedersen has proven again and again his ability and willingness to lead not just for his agency but for all water agencies.”

With a bachelor degree in civil engineering and a master degree in business administration with a specialty in Finance, Pedersen began his career with the Los Angeles County Department of Public Works. In 2010, he left the County to work for the Irvine Ranch Water District, first as its director of water operations and eventually as executive director of operations. He also serves on the boards of the SCWC, Association of California Water Agencies, Urban Water Institute, and WaterReuse California.

The SCWC Annual Event is known as the area’s biggest networking event for water, business, agriculture, local government, labor and environmental leaders, and this year, although virtually attended, was no different. The event featured keynote speaker Brenda Burman, the U.S. Bureau of Reclamation Commissioner, and featured a special message from U.S. Senator Dianne Feinstein.