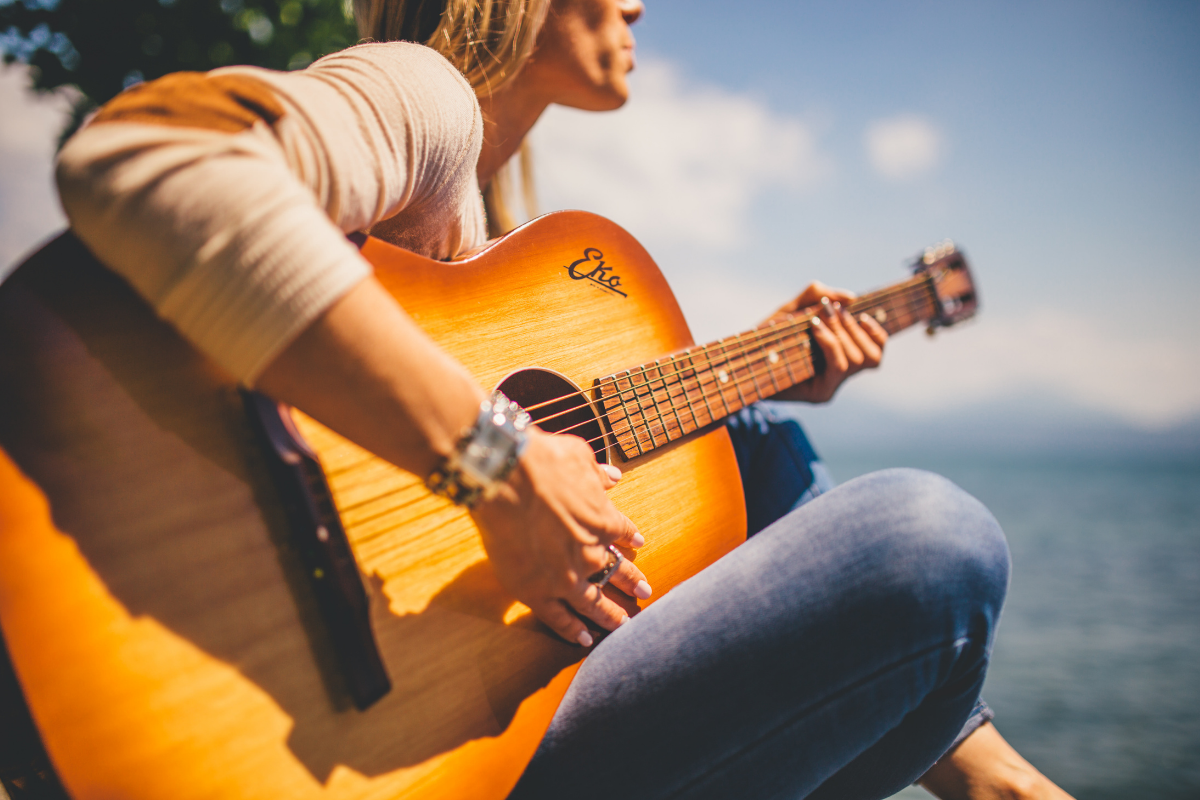 Californians have been known to love their music. From classic rock to modern pop, the Golden State has produced some of the most iconic and listened-to tunes in history. But what about when the music is about something Californians care deeply about? In that case, you get songs that explain California water. Here are ten examples of tunes that perfectly capture this complex and nuanced issue. View the full playlist on YouTube.

“It Never Rains in Southern California” by Albert Hammond 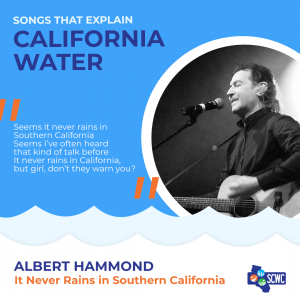 This song of suffering written by English songwriter Albert Hammond in the 1970s pre-dates the devastation of California’s severe 1976-77 drought. Remember all the swimming pools that were drained and the rise of the memorable but kind of icky “if it’s yellow, be mellow; if it’s brown, flush it down” water conservation campaign? Hammond seemed to be using the dry weather as a metaphor for his artistic career, which hadn’t yet taken off. Lucky for him, this song changed all that. For some, this is the first song that comes to mind when they think of California droughts because the refrain is so on the nose. It’s been covered by a multitude, from Sonny & Cher to Tony! Toni! Toné! to David Hasselhoff so there’s a version for everyone! 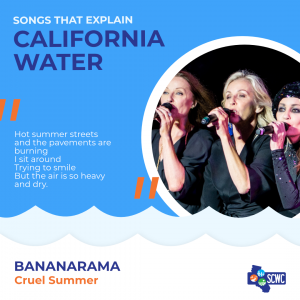 This 1980s classic by girl group Bananarama captures the mood perfectly even in April, as the Golden State roasted in a summerlike spring heat wave. With June just around the corner,  many are wondering if this summer will break last year’s record for hottest on record, stressing electrical grids and drying out landscapes just as mandatory water use restrictions will likely kick in for many. We’re guessing it won’t be hard to relate to these lyrics: Hot summer streets/and the pavements are burning/I sit around/Trying to smile/But the air is so heavy and dry.

“No Rain” by Blind Melon 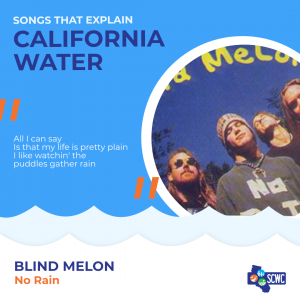 The title alone qualifies Blind Melon’s monster hit as the anthem for the 2021-22 water year…and 2020-21…and 2019-20. We could go on. We also think California water folk can relate to the opening line: “All I can say/Is that my life is pretty plain/I like watchin’ the puddles gather rain.” After all, these are the folks who follow snowpack survey results and who might be wagering for bragging rights in annual “guess the State Water Project allocation” contests, though it has been an exceptionally grim game this year. 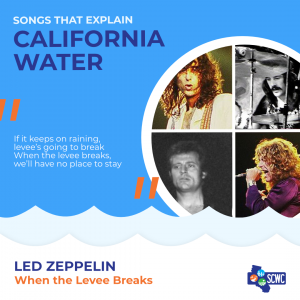 “When the Levee Breaks” by Led Zeppelin

This century-old blues song was catapulted to worldwide fame when iconic rock band Led Zeppelin covered it in the early 1970s. Written by Memphis Minnie to document the devastation of the Great Mississippi Flood of 1927, the song resonates with us as we think about the fragility of the aging dirt levees in the Bay Delta that are all that protect our main source of water from catastrophic earthquakes, floods and rising sea levels. May the levees not break anytime soon. 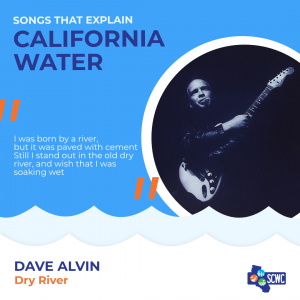 Born and raised in Downey, California, Dave Alvin is a singer/songwriter known for founding the L.A. punk-and-roots-rock band the Blasters and a brief stint in X. He has said that his 1991 song, “Dry River,” is about a survival of the spirit, born of his vision of orange groves blooming again in Southern California and of the San Gabriel River freed of its concrete channel. The song is less an environmental anthem than a poignant song about nature’s endurance. 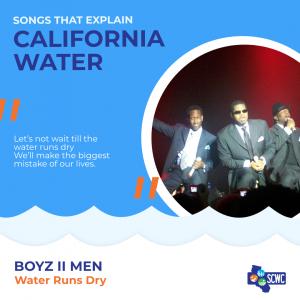 The beautiful harmonies and emotional ballads of the 1990s-super group B2M brought a tear to many an eye and this song was no exception. It tells the story of a couple trying to find their way back together after a break-up: Let’s not wait till the water runs dry/We’ll make the biggest mistake of our lives. But those words also bear meaning for Californians looking for a solution to the state’s long-standing water woes worsened by severe drought and climate change impacts. Indeed, let’s not wait until the water runs dry.

“Snow in California” by Ariana Grande 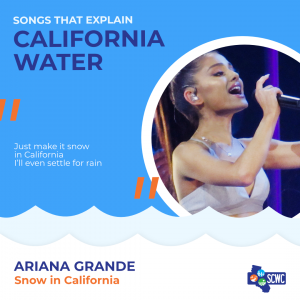 This Christmas song by superstar singer Ariana Grande may be inspired by the classic “Let It Snow” record, but Grande puts a real California water spin on it. The lines “Just make it snow in California/I’ll even settle for rain” astutely sum up one of climate change’s key impacts. The state of California’s water supply used to arrive in the form of snow in the Sierra Nevada Mountains. The snow would melt in the spring and flow down into rivers and reservoirs. This system is now changing due to climate change. So we’re definitely asking for snow but we’ll totally settle for rain.

“Rain on Me” by Lady Gaga and Ariana Grande 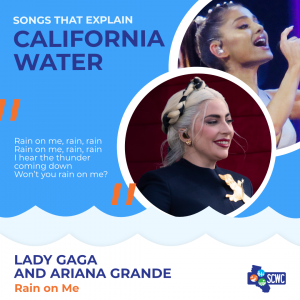 “Cloud of Dust” by Brad Paisley 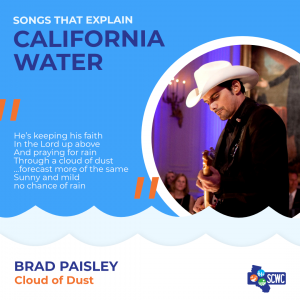 It’s easy to forget when you’re sitting in traffic and the concrete expanses in California’s urban areas, but agriculture is a significant sector in California’s economy. It regularly accounts for just about 20% of total U.S. agricultural production and it is a major water user within the state. Brad Paisley’s sad song about drought’s effects on farmers takes place in West Texas, but we’re sure that California’s farmers in the Central Valley can relate to dashed hopes of the “forecast more of the same/Sunny and mild no chance of rain.” 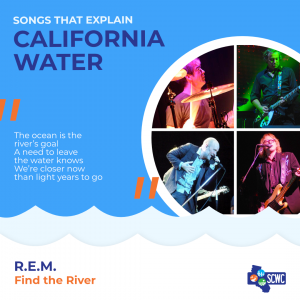 The pretty melody of Find the River by R.E.M. never has been one of the acclaimed band’s big hits (think “Man on the Moon” or “Shiny Happy People”) but it’s a hopeful standout about strength and courage of moving forward, one step at a time. “The ocean is the river’s goal/A need to leave the water knows/We’re closer now than light years to go,” sings Michael Stipe and we feel the pull of the tide.