We often don’t give a second thought to the journey of water before it reaches our homes. But as we face the worst drought on record in 1,200 years, water is at the forefront of our minds. Some families are facing water restrictions required by cities and utility companies and many are asking why.

Drought conditions have significantly reduced the amount of water that can be imported to Southern California. The bad news is some data shows our existing water supply may diminish by 10 percent in the next 20 years. The good news is the Water Replenishment District (WRD) has been planning for extreme drought conditions for 60 years.

After World War II, Los Angeles County experienced a population boom. Billions of gallons of water were pumped out of the ground faster than nature could replenish. As a result, groundwater fell to extremely low levels. In some inland areas, wells went dry. In some coastal areas, seawater encroached into our drinking water aquifers making the water too salty to drink.

To repair the groundwater basins, voters approved a measure to create WRD in 1959. The immediate objective of WRD was to purchase replenishment water to restore the over-drafted basins and inject water into a barrier system to prevent the migration of seawater into aquifers. 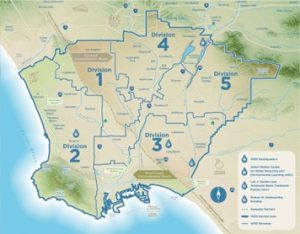 Today, WRD protects groundwater for a 420-square-mile service area covering 43 cities, including parts of the City of Los Angeles. WRD serves four million people and groundwater managed by the district provides nearly half of the region’s water supply. The other half of the water is imported from hundreds of miles away through a series of canals and pipelines.

In 1960, WRD began its journey to offset the need for imported water. WRD financed the world’s first water treatment plant for the specific purpose of producing water for groundwater replenishment– the Whittier Narrows Reclamation Plant. The facility is owned by the Los Angeles County Sanitation Districts (LACSD) and has been a source of recycled water for WRD’s replenishment activities for 60 years. 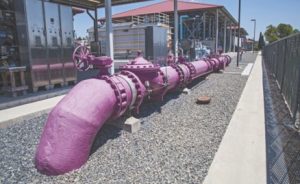 In 1995, the West Basin Municipal Water District began producing advanced treated water from its Edward C. Little Recycling Facility that WRD buys for injection into the West Coast Seawater Barrier. In 2006, WRD completed the construction of its Leo J. Vander Lans Advanced Water Treatment Facility to provide recycled water to the Alamitos Seawater Barrier. That same year the Los Angeles Bureau of Sanitation completed the Terminal Island Advanced Water Purification Facility to provide recycled water that WRD buys for seawater injection. To date, the three plants have produced over 91 billion gallons of recycled water for that purpose and have the capacity to meet the needs of all seawater barriers.

In 2004, WRD set out on a monumental mission – to create a resilient and locally sustainable source of water for groundwater replenishment. WRD called this initiative the Water Independence Now (WIN) program. Prior to WIN, about 37 percent of WRD’s operations relied on imported water. To offset the need for imported water, WRD increased its portfolio of recycled water. 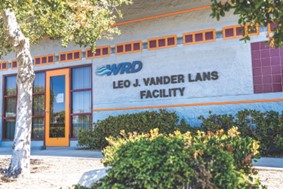 In 2019, advanced treated recycled water from WRD’s Albert Robles Center (ARC) began deliveries to the spreading grounds. This facility treats up to 14.8 million gallons of water a day that is used as a source to replenish groundwater basins.

The completion of ARC brought the mission of WIN to fruition. Since construction has been completed, WRD and partner agencies produce enough recycled water to meet our replenishment needs.

As WRD’s history illustrates so well, recycled water is the most reliable option in the face of diminishing imported supply. The three LACSD plants and ARC have delivered over 749 billion gallons of recycled water for groundwater recharge. This was accomplished without a single drop of imported water.

WRD’s next goal is to raise the stakes and completely offset the need for imported water in the region. This vision is called the Water Independence Now for All (WIN 4 All) plan. To reach this goal, WRD will take advantage of available groundwater space to store recycled water. These steps will strengthen our water security and help us build a drought-proof water system in southern LA County.