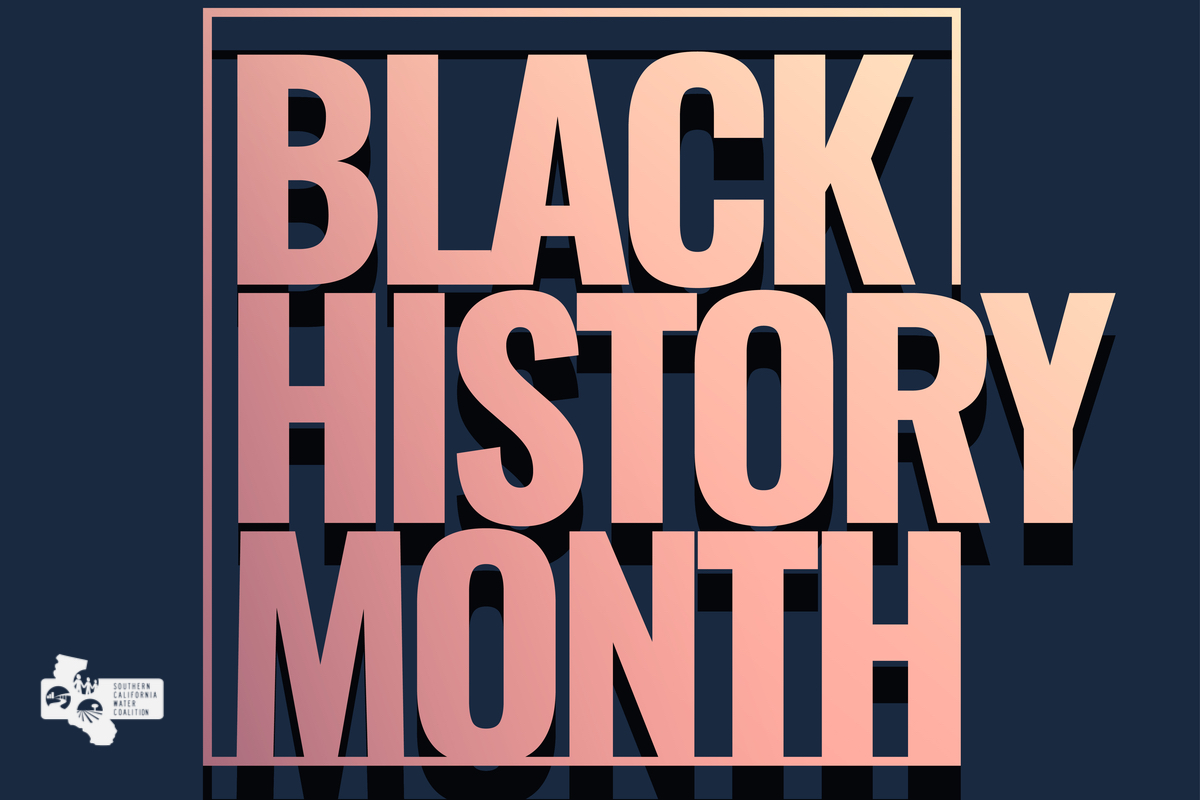 In honor of Black History Month, the Southern California Water Coalition celebrates all Black leaders whose dedication, vision, and initiative have influenced the future of Southern California water resiliency. A time of reflection, remembrance, and inspiration, Black History Month encourages us all to visualize and achieve a better, more inclusive, and united world.

Four remarkable resource conservation leaders here in Southern California offered us their experiences as industry professionals, advised those just embarking on their career paths, and shared the influence and inspiration of those who came before them on their professional intentions and outlooks.

Forging Her Own Path

Gloria D. Gray, a woman of many firsts including the first person of color and African American to lead the Metropolitan Water District of Southern California’s Board in its 90-year history and only the second woman to do so, takes Black History Month to celebrate and reflect on inspirational Black leaders in history. 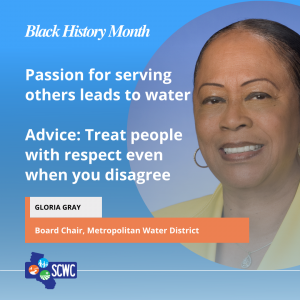 “There are many great historical leaders who inspire me,” said Gray, who was also the first African American woman to be elected to the West Basin Municipal Water District, the first to serve as Metropolitan’s Vice-Chair and the first African American to chair a Metropolitan Board meeting. In addition to her parents McDonald and Annie Elmore Lee, she is inspired by “Mary McLeod Bethune, who founded Daytona Normal and Industrial Institute for Negro Girls, and Lillian Mobley, who was known as the ‘Community Mother’ and led the fight to keep the doors of the MLK/Drew Medical Center open, and Coretta Scott King, an influential author, civil rights activist, and wife of the Rev. Dr. Martin Luther King, Jr,” said Gray, who was also the first African American and African American woman to serve on the Delta Stewardship Council when appointed by former Assembly Speaker Karen Bass in 2010. “These are just a few of the many trailblazers who helped open the doors for others to achieve.”

Her distinguished service in the water industry earned her the highest honor in the SCWC: the Harriett Wieder Award. “Gloria D. Gray is taking on the state’s most complicated water policy issues. Her unparalleled expertise and thoughtful approach are crucial. We’re pleased to honor her as a true water leader,” said Executive Director Charley Wilson at the time of the award. The statement remains true as true today as it was then.

Gray, who has a background serving others in healthcare and education, came into the water industry to serve again in a new way. She encourages those just entering the field to embrace diversity. “Our challenges are very complex, and diverse input provides better solutions to these problems,” said Gray. “I encourage them to listen—find ways to agree—treat people with respect, even when they have a different opinion.”

Many influential people, achievements, and events playing out during her lifetime have inspired Jasmin Hall, one of five Board members overseeing the Inland Empire Utilities Agency. Throughout her education and early career, Hall found great sources of motivation in Black public figures who were achieving firsts in their fields. 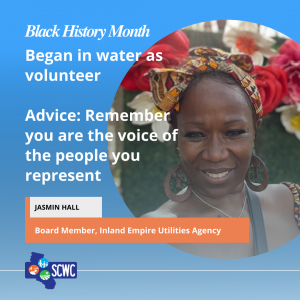 “People like Shirley Chisholm, the first Black woman who ran for Congress and won, and the first Black mayor of Chicago, Harold Washington, whose campaign I worked on while I was in school at Mundelein College (now affiliated with Loyola University Chicago), they inspired me,” said Hall. “They had a lot of firsts, and eventually, so did I.”

Hall was the first African American President of the Inland Empire Utilities Agency Board of Directors and serves as the President of the California Association of Sanitation Agencies (CASA). “As I was growing and learning, I didn’t take anything for granted because I always had those people who influenced and encouraged me.” Later in her career, Hall found African American figures such as Audre Lorde and Maya Angelou especially relevant. “They helped me to be courageous and not to forget, as a servant to the people, I need to take care of myself as well.” 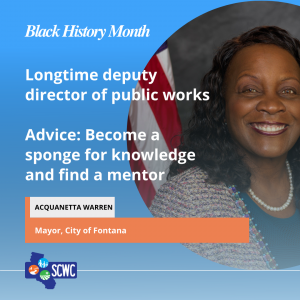 Mayor Acquanetta Warren, currently serving her third term as the Mayor of the City of Fontana, is chairwoman and member of many boards and commissions that serve the public good, including SCWC’s Task Force for Water Equity, Access, and Affordability. She became Fontana’s first female and first African American mayor in 2010. Reflecting on those who inspired her when she first dove into the water industry, she recognized two of her fellow contributors in this article.

“Gloria D. Gray, Chairwoman of Metropolitan Water Board of Directors, and Jasmin A. Hall, a director at Inland Empire Utilities Agency, are inspiring me and others in our region and state,” said Mayor Warren.

Harold Williams, Immediate Past President of the West Basin Municipal Water District, also found inspiration in the wisdom of Black leaders in history. “For the first eight years of my career, I was a draftsman in public works,” said Williams. “I was guided by these words of Dr. Martin Luther King, Jr.: ‘If you are called to be a street sweeper, sweep streets even as Michelangelo painted, or Beethoven composed music or Shakespeare wrote poetry. Sweep streets so well that all the hosts of heaven and earth will pause to say, here lived a great street sweeper who did his job well.’”

Advice for Those Starting Out 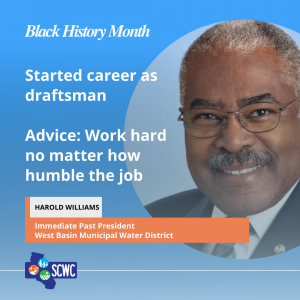 Williams took this humbling advice to heart throughout his career, impassioned by each step to achieve a broader level of service. “My first appointment as City Engineer/Public Works Director of Lynwood is what did it,” said Williams. In this position, he was responsible for operating and maintaining a water system consisting of approximately 10,300 customers with ten wells, 80 miles of water mains, and a three-million-gallon reservoir. His advice for anyone seeking a career in water is to “learn all you can about the water industry as soon as possible, including at least how to get a D3 or T3 certification. Learn how water is a part and affects EVERYONE.”

Mayor Warren weighed in, recognizing the many career paths water can provide. “Just about every discipline can lead to water management,” said Mayor Warren. “Be prepared to become a sponge and make sure you find a mentor to assist your efforts in navigating the best pathway. This will help you achieve a goal which can be overwhelming.  Water is fluid meaning you can choose from office job to operations to policy. It is the last frontier to explore so many possibilities.”

Jasmin Hall, who joined Gray on the Metropolitan Board from 2019-20 and was the first Black woman from San Bernardino County to join that Board, encourages those who want to start a career in utility management not to lose sight of the people they serve. “I don’t have a technical background, but I learned to ask ‘what’ instead of ‘why,’” said Hall. “What is the process, what is the impact, and what is best for the people.” Hall has found success as a public servant by bringing conversations back to the people and advises those starting in the resource industry to do the same.

“I’m most looking forward to seeing Black men and women working on maintenance and CIP projects in the public right of way,” said Williams. “This would make me SMILE!”

“Look at how vitally we all need water,” Hall advised. “We all share water — see it as it sustains your life. Take your desire to provide these services to your community and make sure it’s available to everyone.”

Mayor Warren also weighed in on a more diverse future for water. “It’s not easy breaking the barriers that exist in having a career in water, particularly for women of color and especially African American women. We need to foster the concept of bringing our young people to see the possibilities and help them in the industry. I’m encouraged by the role I have with the Southern California Water Coalition because I plan to make a difference by showing the benefits of all water agencies being inclusive to all. With every drop of water, we should be fluid and include all.”

Gray added: “As leaders, we need to hold ourselves accountable to attract more people of color, and women, to jobs in the water sector so they can become the next generation of water leaders. We are more successful when we work together. That means creating time and space to listen to one another. And turning those ideas into action, change and results.”