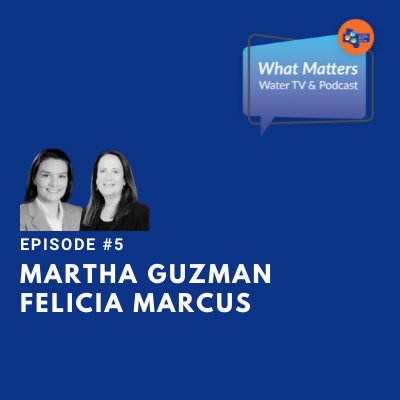 Today we are talking to two women who have done amazing things for the environment and water issues in our state. They’ve broken barriers and achieved tremendous results – and their work will undoubtedly have an effect on Californians for generations to come. Both women have stories to share and advice to offer and you won’t want to miss a word of what they have to say.

Martha Guzman was appointed by President Biden as the first Latina to lead the Environmental Protection Agency for the Pacific Southwest. She is longtime Central Valley advocate from Sacramento who began her career working for the United Farm Workers and California Rural Legal Assistance Foundation. She has served as a Commissioner on the California Public Utilities Commission. While she’s done many things to deliver access to clean, safe water for underserved communities, she told us she is most proud of the work she was able to do in helping to pass California’s Driver’s License Act for the Undocumented, as well as making sure that electricity kept flowing to people despite the economic fallout of the COVID-19 pandemic.  She is an experienced leader who values economic justice and strives to give voice to those who need it.

Felicia Marcus jokes that she has had an accidental career, but we can see that her accomplishments are serious and consequential. Originally an East Asian Studies major with the intent of changing the international world, she fell into environmental and domestic policy instead. Early in her career, she learned about how sludge was still being dumped into Santa Monica Bay and decided to take action. This led her on a journey to become an advocate, attorney and administrator championing conservation of California’s natural resources. She even earned the moniker of California’s water czar during the state’s last severe drought as chair of the state’s water board. Today, she’s a fellow at Stanford’s Water in the West Program and a consultant and member of the Water Policy Group.

Tune in now on YouTube or wherever you listen to podcasts to learn more about these two smart, powerful women as well as their impact on California’s future. We hope you enjoy it!